What is the Biggest Washing Machine? 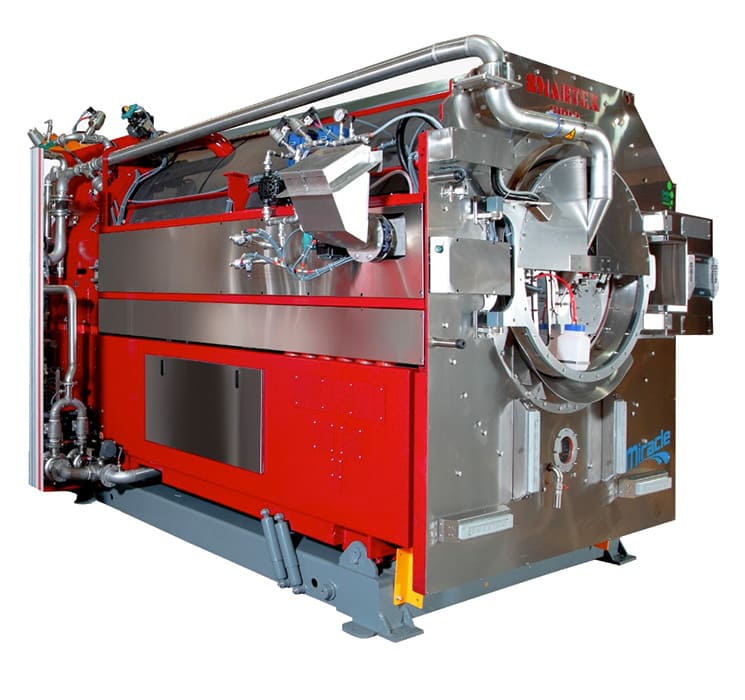 What is the Biggest Washing Machine

It is necessary to pay attention to the fact that the products to be used in the face of the biggest washing machine needs have certain characteristics. Tolkar is a leading company in the production of machines with the highest washing capacity among industrial washing machines.

While the biggest washing machine Tolkar Smartex stands out with its performance, it is a preferred product for businesses with its saving structure. Tolkar, which stands out with its experience, especially in laundry machines, carries out successful works in the sector with its qualified products.

Smartex Miracle produced by Tolkar machine responds to the needs of many businesses and institutions with a washing capacity of a minimum of 60 kg and a maximum of 500 kg. Efficiency is a very important issue in industrial washing machines.

In addition, the production quality of the machine and the advantages it will provide to the user are among the things to be considered during product selection. Washing machines produced by Tolkar are produced in various capacity ranges.

These machines are produced in different ranges with capacities of 60kg, 120kg, 135kg, 150kg, 225kg, 340kg, and 500kg. In this type of industrial washing machine where every need is considered separately, the business needs are analyzed by Tolkar and acted upon.

During these studies, in which market research and sectoral analyzes are carried out under the supervision of experts, a professional team works. Accordingly, it becomes possible for the products produced to take place in the market of first quality.

In addition to washing machines, Tolkar also has a presence in the sector with dryers with similar features. These types of machines also have very functional features in terms of the textile industry. It has a structure that allows high capacity and mass production.

Another feature of the washing machines produced by Tolkar is that they have 400G spinning power and the capacity to do this work homogeneously. One of the general features of the machines is that they allow vibration-free tightening.

The existence of the vibration-free 400G clamping feature has a direct impact on the lifetime of the machines and leads to long service life. For example, when you place a cigarette upright on the machine, there is no change in the cigarette depending on the movement in the machine during the squeezing process. Even when operating at maximum speed, the cigarette does not move. The less movement that occurs during the spinning stages of washing machines, the longer the machine life will be.

Many features should be known about the biggest washing machine. The usage areas of such machines are quite high and they are preferred by various businesses or institutions because they are industrial products.

Like washing machines, which facilitate quality work thanks to their features, dryers are high-capacity products. These machines, produced by Tolkar, are designed with every need in mind.

These machines stand out with their high capacities. Even when machines such as Smartex Miracle have a capacity of 500 kg, they consume half of the water that needs to be consumed. Thanks to these machines, which allow economical water consumption, heating energy is also saved.

The reduction of heating energy by half should be understood as a reduction in cost items for the user. The advantages of these machines are that they also have an environmentally friendly approach.

While the biggest washing machine is preferred, it is easier to get qualified service thanks to Tolkar’s professional machines. Another feature of these machines is that they reduce chemical consumption by half.

Thanks to these advantages provided by washing machines, it is easier to save money, and this is considered a reason for the preference of users. One of the important features of washing machines is that they save half of the amount of wastewater.

Like washing machines, dryers are also preferred products in terms of offering different advantages to users in their fields. The benefits offered by the machines produced by Tolkar are both beneficial to the user and represent an environmentally and nature-friendly perspective.

Tolkar is a corporate enterprise with a sense of responsibility. While working with a professional team in terms of fulfilling its obligations, it carries out its work by giving its due. When it comes to washing machines or dryers, our company is the leader in its field in producing machines that are preferred in industrial products. 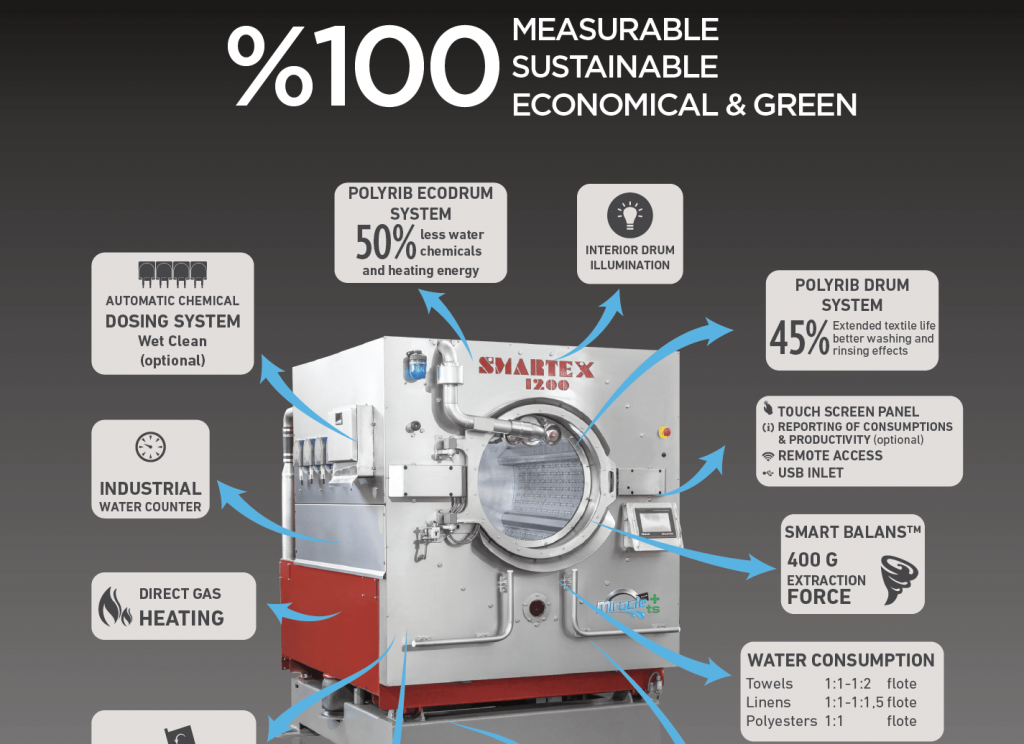 Water consumption is half in high-capacity washing machines (Smartex Miracle).

These machines also reduce chemical consumption by half.

They are produced from an environmentally friendly perspective.

As a result of a conscious approach towards nature, these machines offer a perspective that respects people and the environment while providing multi-faceted savings.

Tolkar washing machines are user-friendly and a leader in saving money.

The large washing machine is produced in such a way that it can perform homogeneous spinning with 400kg power at every capacity.

The largest washing machine is also long-lasting because it can spin without vibration. Even when operating at maximum speed, the machines do not vibrate. Tolkar washing machines, which are among the first choices of consumers, create a great advantage. For this reason, it is safely preferred by a wide range of users.

If you require any further information, please feel free to reach out to us. 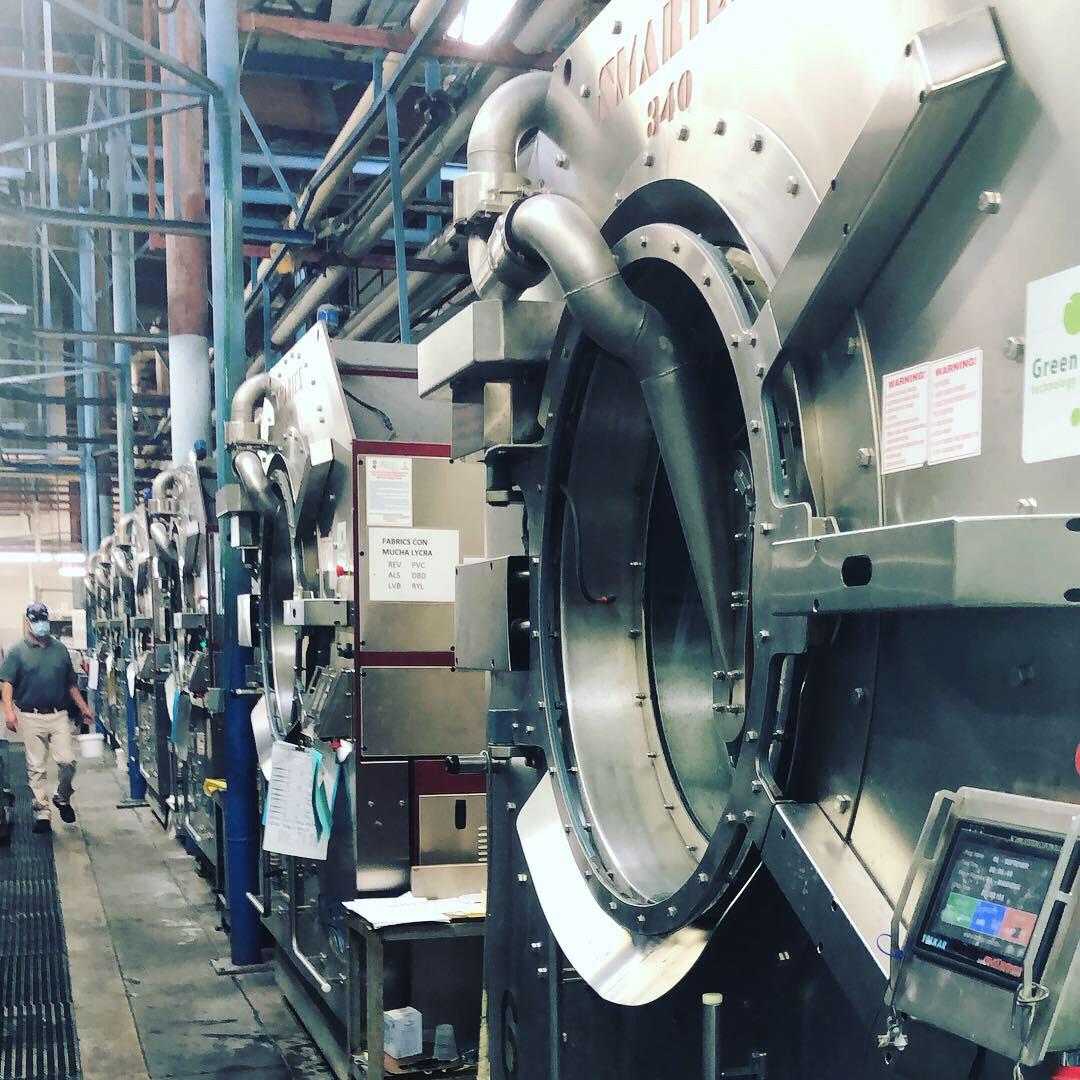 How to Open a Laundry? 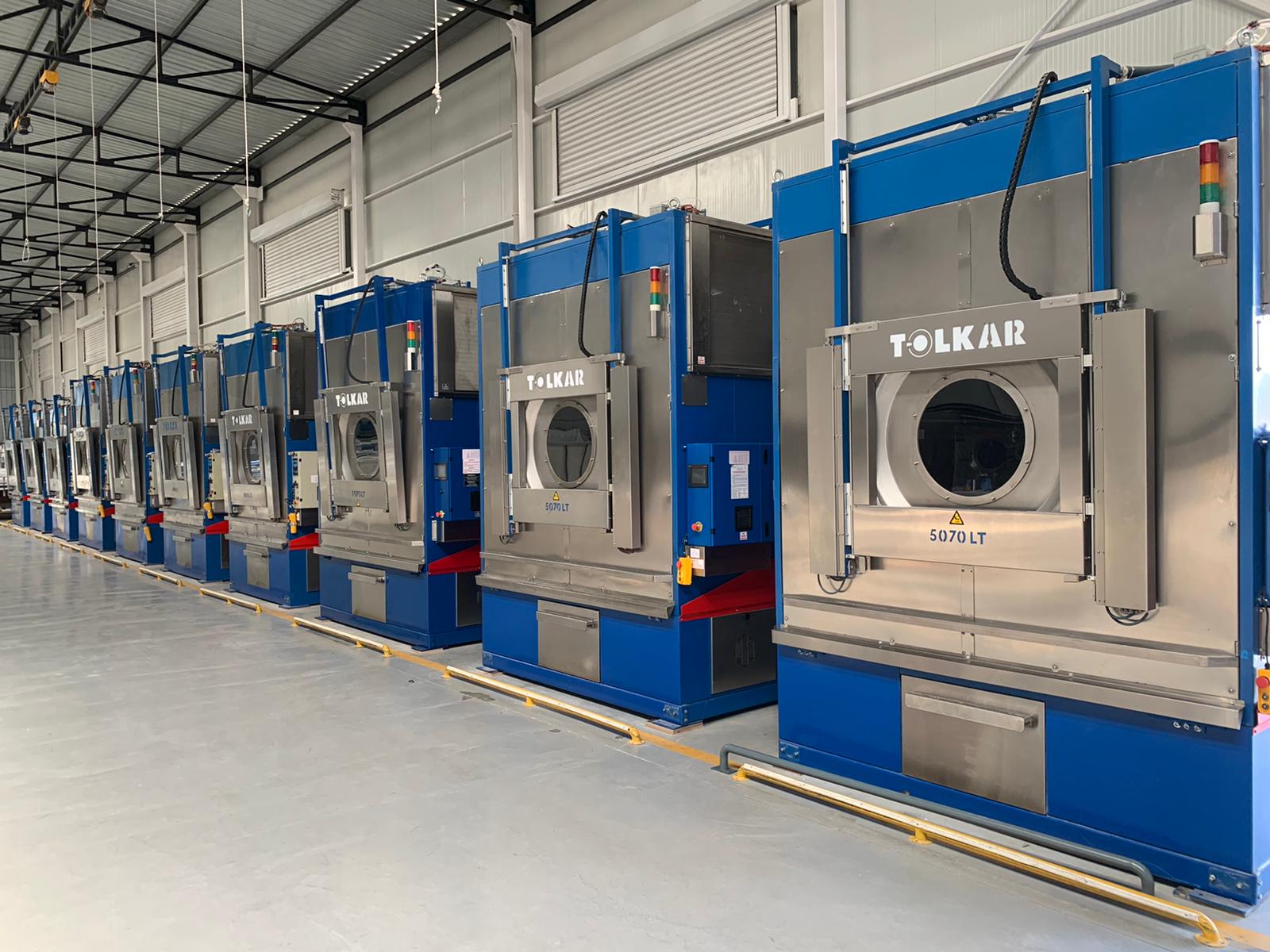 What are the advantages of Commercial… 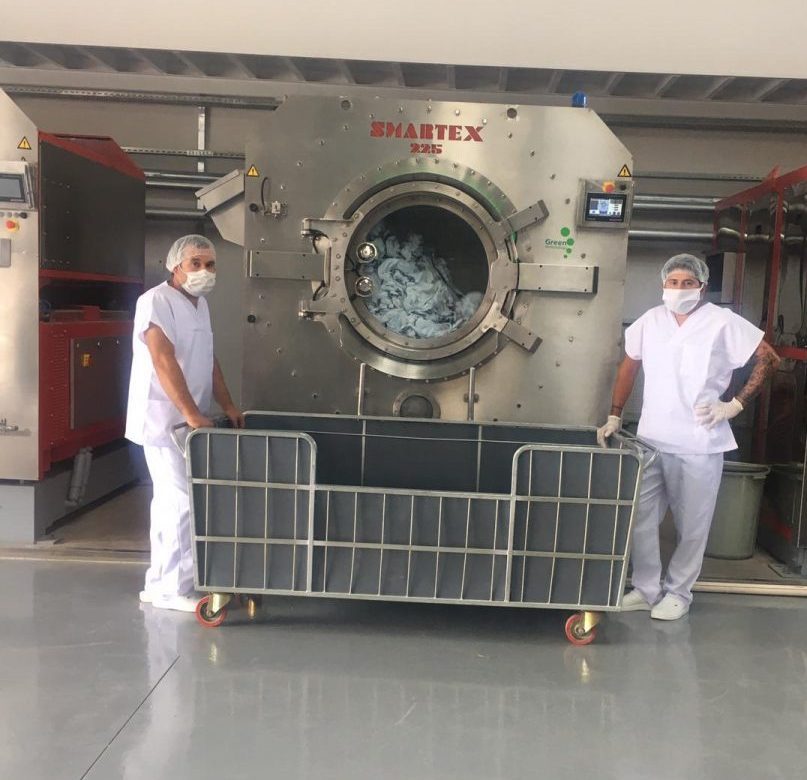 How to do Laundry? 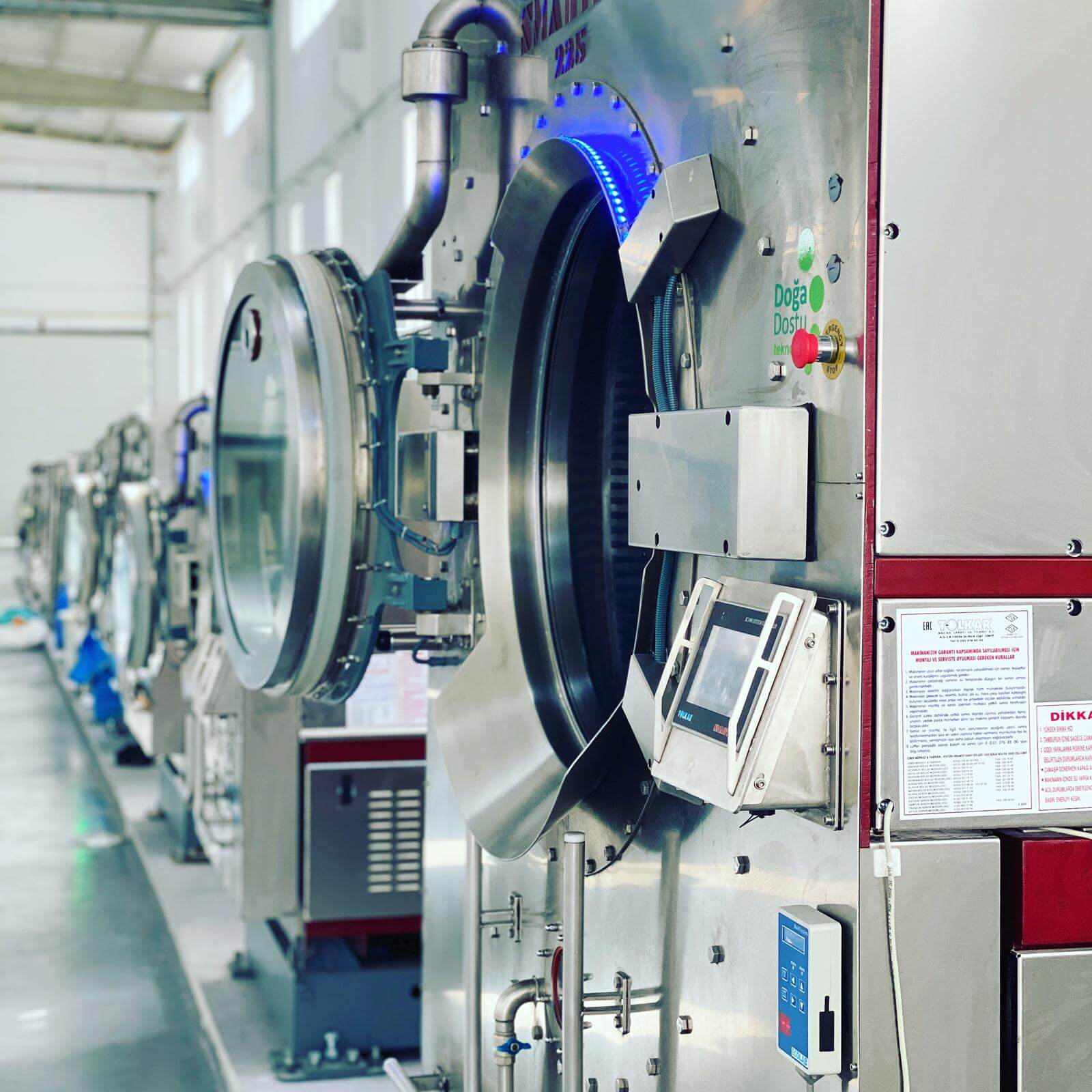 What is Commercial Laundry?

Hit enter to search or ESC to close